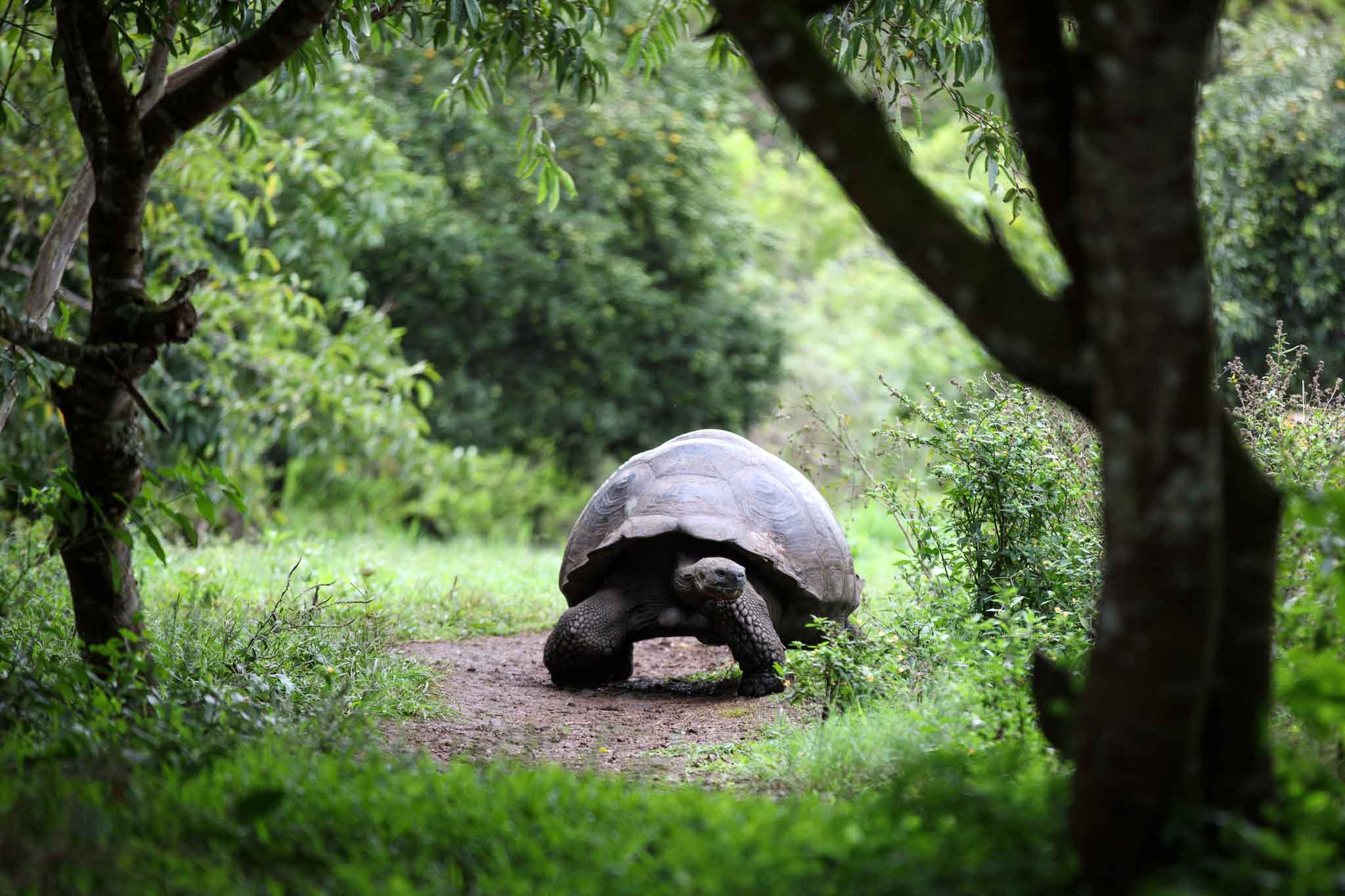 Wildlife
BIRD LIFE
A total of 140 species of birds have been registered in Galapagos: 58 residential, 76 migratory and 6 introduced. Close to 50% of the resident birds are endemic to the Galapagos. Some of these species are currently threatened due to factors associated with human presence.
The majority of animals seen by visitors are birds. A haven for bird enthusiast, the Galapagos is home to a variety of sea, coastal, and land birds including three species of Boobies, Penguins, Finches, Flightless Cormorants, and Waved Albatross to name a few. The shear number and the seemingly tame nature of these birds are sure to amaze all who visit.
Galapagos birdlife can be classified in 3 main categories: Sea birds, Coastal birds, and Land birds. 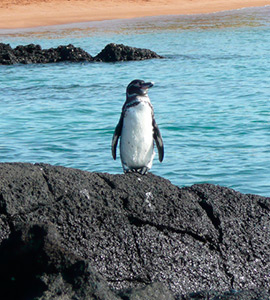 Sea Birds
The cool, oxygen-rich waters surrounding the Galapagos support an abundant marine flora and fauna which, in turns, support a variety of sea birds. The most obvious and frequently seen sea birds are members of the Pelecaniformes order. In the Galapagos, these include two species of frigate birds, three species of booby birds, the brown pelican, the red-billed tropicbird, and the flightless cormorant.
No marine region would be complete without sea gulls (Charadriiformes order), and the Galapagos are no exception. However, there are only two species of gulls, the swallow-tail gull and the lava gull, and both are endemic to the archipelago. Another bird belonging to this order that is commonly seen is the brown noddy tern.
A third order of sea birds found in the Galapagos is the Procellariiformes. This order includes the ubiquitous, but difficult to observe, Audubon shearwater and a variety of storm petrels. It also includes the magnificent waved albatross, which, with its 7-8 foot wingspan is the largest bird in the Galapagos.
The final major order of sea bird represented in the Galapagos, remarkably, is the Sphenisciphromes, the penguins! The sole penguin found on the equator is the endemic Galapagos penguin. 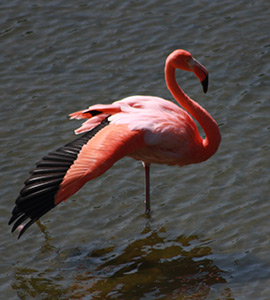 Coastal Birds
The Galapagos Islands coastline comprising beaches, rocky shores, mangrove lagoons, and saline tidal, provides many habitats for the resident shorebird species.
The coast of the Galapagos serves as a home to a diverse group of shore birds, waders, waterfowl, and lagoon birds. These birds are capable of long distance flights and are often migratory; they do not feed out at sea. Instead, they find food between the tides, in coastal lagoons, and in ponds near to the highland areas of certain Islands. 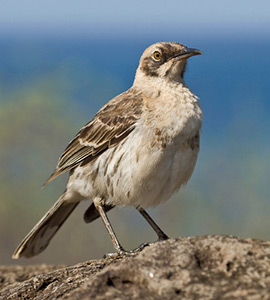 Land Birds
Few species of land birds inhabit the Galapagos Islands, and 3 quarters of these are endemic, or occurring only in the archipelago. Unlike the seabirds, most of which are excellent long-distance fliers, land birds from the tropics have little cause to make long flights. Though relatives of all the Galapagos species may be found on the nearby mainland, only a freak of fate would bring them out a thousand kilometers from land. This must have happened, however, at least fourteen times in the past.
With few exceptions, the land birds are singularly dull-colored. As if to make up for this lack of exciting color, their "tameness" is unsurpassed. With attitudes to man that seem to range from indifference, curiosity, and fearlessness, to outright impudence, the Galapagos land birds are a pleasure to watch and study. 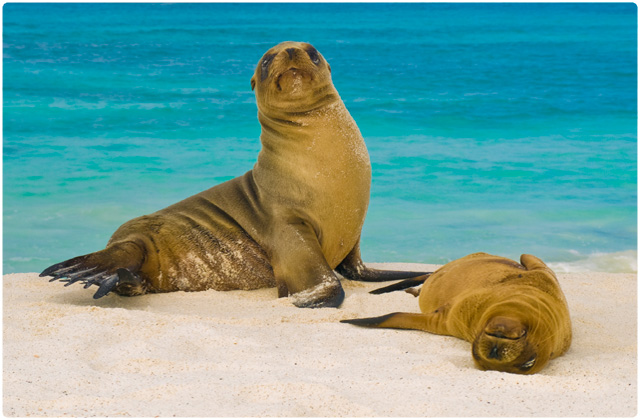 Sea Lions
Sea Lions live in large colonies. Adult males known as Bulls are the head of the colony. Bulls grow to be up to 7 ft (2 m) in length and 800 lbs (363 kg). As males grow larger they fight to win dominance, and for territory which includes a Harem of 5 to 25 Cows (females). Dominant Bulls will fight off any intruder entering the territory.

Each female in the harem has a single pup born a year after conception. The pups have a strong bond with their mother. The mother will nurture a pup for up to 3 years. In that time period, the mother and the pup will recognize each other's bark from the rest of the colony.
The mothers will take the young pups with them into the water while the pups are in their nursing period. When the pup is 2 - 3 weeks old the mother will mate again.

Within the colony, the pups live together in a rookery. Pups can be seen together napping, playing, and feeding. It is common to see one mother 'baby-sitting' a group of pups while the other mothers go off to feed.
Galapagos Sea Lions are especially vulnerable to human activity. Their curious and social nature makes them more likely to approach areas inhabited by humans, which allows them to come in contact with human waste, fishing nets, and hooks. Sea Lions can be seen all over the islands. Snorkeling and kayaking with the playful pups is often the highlight of a visit to the Galapagos. 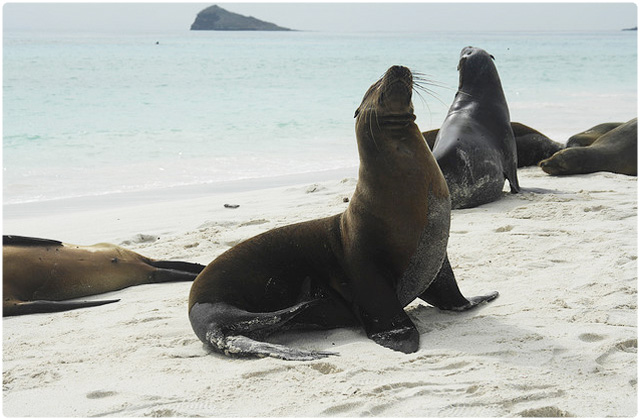 The Galapagos Fur Seal is the smallest of the Southern Fur Seals reaching a length of up to 5 feet in length at maturity. Their coats of dark gray brown to dusky black nearly lead these animals to extinction, as hunters targeted them. Pups are born with a smooth and silky skin to which fur develops around 6 months of age. This made them prime targets for hunters back in the 18th century.

These animals have survived from the verge of extinction, and are the shiest creatures in the archipelago. Their numbers now compare in numbers with sea lions. During the day they hide from the hot equatorial sun in shelves or caves of the rocky lava cliffs of the western islands. At night they feed on squid and fish avoiding the sharks, which are their natural predator. 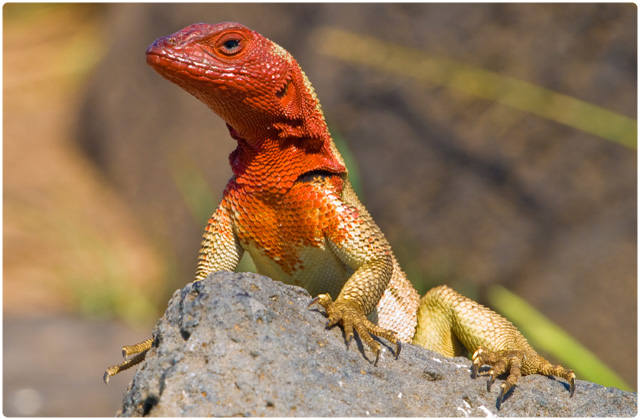 Reptiles
The Galapagos Islands are a World Heritage Site. One of the things that sets them apart is the uniqueness of the animals — especially the reptiles: ninety percent of the reptiles are endemic, and are found nowhere else on Earth.
In 1845, Charles Darwin wrote that the Galapagos Islands seemed like "paradise" for reptiles; he was right. The Galapagos are dry and hot for the better part of the year, and there is not much to eat. Reptiles have adapted to these conditions. Their scaly skin is an effective protection against the sun, and they can find shade if they get too hot. They have a slow metabolism, being "cold-blooded," and therefore do not need a lot of food. The Galapagos Islands also favor reptiles due to the lack of competition or predators in the form of native mammals. In the absence of mammals, Galapagos reptiles evolved to fill available niches. This is why most of the islands' 22 reptile species are endemic. The land reptiles are divided into four main groups: tortoises, iguanas and lizards, geckos, and snakes. The marine reptiles are: marine iguanas and sea turtles.
The Galapagos Islands are indeed known for their rich reptilian population, beginning with the giant tortoises, the "Galapagos" from which the archipelago derives its name. It was the giant tortoises, with 11 subspecies scattered about the archipelago that first called Darwin's attention to the amazing diversity of the Galapagos wildlife. The most commonly seen sea turtle is the green sea turtle, which is considered to be endangered throughout its range, except in the Galapagos.
Lizards are represented by three major types: iguanas, lava lizards, and geckos. The iguanas fall into two basic genera represented by the marine iguana and the land iguana. There are two types of land iguana, usually considered different species, although there is some data that suggests that the two are actually different races of the same species. The lava lizards consist of a single genus, Tropidurus, divided into seven species scattered among most of the islands. Lastly, there are three endemic species of snake.